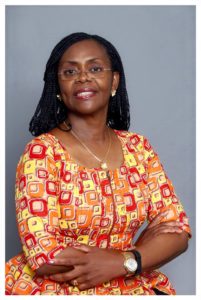 In April 2013, Irene underwent a surgery to replace her diseased lungs after twenty years of living with Chronic respiratory diseases (Bronchiectasis) and a debilitating neuro-muscular disease (Myasthenia Gravis). Though the lung’s transplantation went very well, Irene developed complications within 48 hours following the surgery, which required that coma was induced as her organs began to fail. She came out ofthe coma four weeks later, only to be told that her hands and feet may need to be amputated.This was because she had poor blood circulation during the coma resulting in insufficient flow of blood and oxygen to her extremities. As a result of this, she suffered necrosis in her hands and feet. Her hands recovered miraculously, but God promised to give her the Feet of Grace that will take her to places beyond her imagination and where her natural feet would not have taken her.

On Friday, May 31st, 2013, Irene had another surgery and her two legs were amputated below the knees. At the age of 46 years, she was faced with the challenge of living life as an amputee. Within one year after the amputation, and following extensive rehabilitation with the support of her family, friends, doctors and physiotherapists, Irene started living life to the full and the overflowing again. Eighteen months later, she was able to walk several hundreds of meters without the support of the cane.

The idea to begin the Feet of Grace Foundation was birthed six months after the amputation based on the Word of comfort and assurance that God gave to her prior to the amputation of her legs. The period Irene was compelled to sit down without being able to stand or walk was relatively short. However, it gave her an insight into the plight of those who are compelled to sit down on a long-term because of the inability to access funds for prosthetic limbs. Being able to walk again made a huge difference to regaining her autonomy and pursuing her dreams, and this ignited in her the desire to do the same for others.

Because of the grace of God that kept Irene through the twenty years of living with a chronic and debilitating disease, she is able to spark the flame of hope in the lives of others. She demonstrates through her testimony that God’s grace is sufficient for when life happens. That God holds us up through every storm of life, and He uses our trials to build us up and prepare us for our calling.

She is using her life’s story and experiences to teach people around the world what the GRACE of God really means. Her story shows that what the enemy meant for evil, the Lord is using for good.  Her prosthetic ‘Feet of Grace’ are literally taking her to minister God’s love and mercy in places that she would otherwise never have been to.