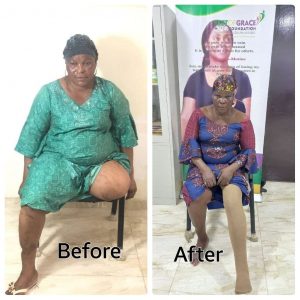 Olasumbo is a 44-year-old widow and trader. An out-of-control vehicle crashed into her shop on May 16th, 2012. The government hospitals were on strike during this period, and the private hospitals were too expensive for her. She tried the Traditional Bone Setters, but they could not help her. Olasumbo had to wait until the Orthopedic hospital in Lagos reopened a month later. The leg had already become gangrenous and had to be amputated.

She received an artificial leg from the hospital, which wore it until it became beyond repairs in 2019.  She has undergone her casting and measurement and would waiting for her first fitting. She is in the process of getting her prosthetic limb

She is in the process of getting her prosthetic limb. And she was given 150,000 as seed fund for her to start her business again and be independent.