Completed Causes
Donation Goal For This Project is $2,000
100% Donated/$0 To Go
Donate Now

You are donating to : Bose Taiwo 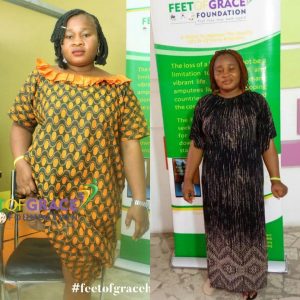 Taiwo Bose is a 36-year-old above-the-knee amputee. She was knocked down and thrown into a gutter by a hit-and-run vehicle on June 3rd, 2014. The crowd rescued her and took her to the Orthopaedic Hospital. She had several surgeries, including the amputation of her leg. She was in the hospital until the end of November 2014. Though she had been discharged from the hospital in September, she was not released because she was unable to pay the hospital bills until a good Samaritan intervened.

She could no longer continue to work in the liquid soap factory where she was employed. She has been unemployed since then. Bose is dependent on her father and brother. She desires to regain her autonomy and independence. She needs a prosthetic limb and support to start a small-scale business in her neighborhood in Ketu, Lagos.