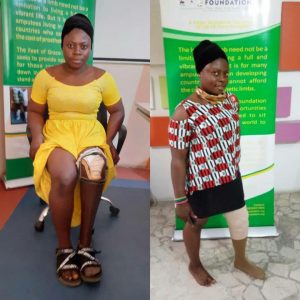 Blessing is 19 years old. She is a below the knee amputee. She had a road traffic accident in December 2008 in Ibadan at the age of 7 years when she was in primary one. Traditional bone-setters managed the case, which resulted in some complications. After one year, she went to the University Teaching Hospital in Ibadan where the gangrenous leg was amputated in December 2009. She spent two months in the hospital after the surgery before returning to school.

The Rotary Club donated her first prosthetic leg in 2015. The leg is broken and beyond repairs. Her single-parent father is road construction labourer and is unable to afford the cost of a replacement for her. Blessing is in SS3 and is struggling with the broken leg since November 23rd, 2018. She is in a desperate need of a new leg to make mobility easier her.